Feels like you’re miles from here,
in other towns with lesser names.
Where the unholy ghost doesn’t tell
Mary or William exactly what they want to hear.
You remember the house on Ridge Road
told you and the Devil to both just leave me alone.
If this is salvation, I can show you the trembling.
You’ll just have to trust me. I’m scared.

Tommy, you left behind
something that will mean everything right before you die.
What if you gained the whole world?
You’ve already lost four little souls from your life.
Widows and orphans aren’t hard to find.
They’re home missing daddy who’s saving the abandoned tonight.
Wish your drinking would hurry and kill you.
Sympathy’s better than having to tell you the truth.

Billy, don’t you understand?
Timothy stood as long as he could and now
you made his faith disappear.
More like a magician and less like a man of the cloth.
We’re not questioning God.
Just those he chose to carry on His cross.
We’re no better, you’ll see.
Just all of us, the lost causes.

‘This is one of the most personal songs, I felt like a weight was lifted off when I finished writing it next to the library in Richards Coffee shop in Winter Haven, Florida. The song tells of four overarching stories that effected my faith in Christ growing up. The first is of an unfulfilled ‘prophesy’ that was given to William and Mary in Winter Haven, Florida (they know, I know, & God knows). The second is an autobiographical tale that happened to me on Ridge Road in Stevensville, Michigan. I was 5 years old and I walked down our long driveway and had it out with God and the devil. I remember telling them both to leave me alone, I was confused and wanted neither of them. The third is of a ‘missionary’ who abandoned his wife and children to ‘help’ others, it only ended in hurting everyone around him, he did more damage than he could ever repair in this lifetime. Maybe he has changed, maybe he has stayed the same. The final story is of Billy Burke, a… healer? A… mystic? I am not sure, either way I saw OZ, I watched the curtain pulled back. I was left in a spiral of disbelief. Maybe he has changed, maybe he has stayed the same.

The truth is if you are looking for God in Christians, prepare to be disappointed; the truth is we humans are all hypocrites, ALL OF US. Luckily I found Christ, in spite of these and other stories that propelled me in the opposite direction.’ – bron 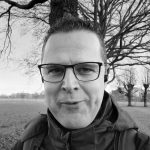