I touch the beginning
Animating animals and tree Gods
Scratching out legends in cave walls
The days pour down into nights as we watched
We mapped stars with peaks, we fought beasts
We caught food for the feast
And we walked to a breast to receive the bound wheat
The grass, black and strange
As we razed plains to ash
We laid claims, exchanged grains, and made pacts
And we clashed, and we strained, and the rains lashed
The young maids were brave, but they were made to lay flat
The old ways were too ingrained to make the reins snap
We laid traps
We gave our names back to the Saints
We sang out thanks and complaints
We burned fat, arranged bones into flames
Each bird a great catch
Our songs were spells, and our spells were plain facts

She laid down in the road where the people go by
And declared herself willing to try
I laid down beside her
But all I could see were the feet as they walked over me
That’s when she told me, “I was holy elixir”
She said “I thought I knew the world, but it was only a picture”
She said “We’re all written in the holiest scripture
It’s just we’re living in this time that says no inhibitions
Get yours, keep going the distance, no limits
And don’t bother protesting because nobody listens
Besides, all your solutions dissolve under scrutiny
And you can’t stand a note of derision
Instead, seek approval to justify your existence
Have opinions, but have no resolve or conviction
Just keep your head down
Breathe the fumes and indulge your addictions
Routine is healthy, ignore the affliction
The cost to the soul and the constant constriction
Don’t consider too closely, have no intermission
Keep throwing your fists in slow repetition
Most of us manage, what makes you so different?
Now, you seem a bright spark
Go ahead, take the road with the pilgrims
Head for the temples of democracy
Freedom, growth, reason, liberty, hope
But don’t pay attention to what’s hanging from the rope”
She said, “Decode the language, unfold the symbols
I’m told disciples got lost in the hillside
Following intellect, they let go of wisdom
And now they’ll tell you the soul’s a closed system
They sacrificed instinct to phony ambition
And now what they hold in their fist has become all that there is
But total existence needs meaning and myth
Many misjudged the way and got lost in the mist
Your loneliness is the symptom, not the sickness”

I was on my knees then, begging for pardon
I was old and clothed in white garments
In a vast red desert where the rocks were dark blue and varnished
And a voice said, “This is the garden
Now you better start sowing or there won’t be a harvest”

I came to under a domed roof
The light was cold and clear and fragmented
There was people, moving, I watched them
I saw a muscle of school girls performing
I saw the ticket woman massaging the small of her back
And a young gent, neat as a crease in his work clothes
And the light, light as breath on the dirty, old track 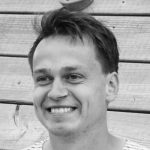